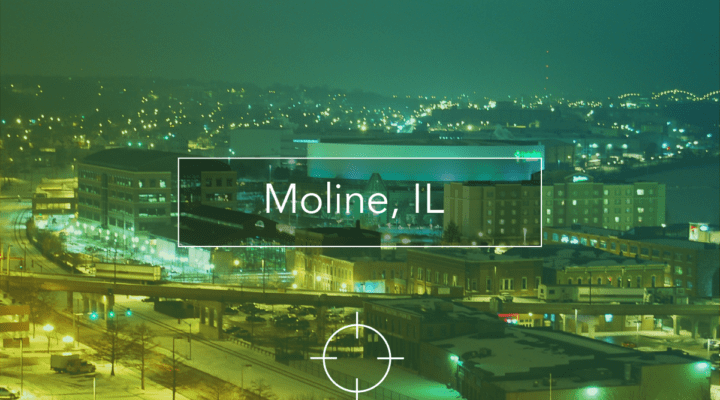 As the largest Illinois city in the Quad-Cities region, Moline has 44,000 residents and is the home of John Deere’s headquarters. When Ray Forsythe was hired as Moline’s Planning and Development Director, he was charged with growing sales tax.

“My initial focus was redevelopment of downtown and overseeing the transition of SouthPark Mall,” said Forsythe, former planning and development director of the city of Moline. “When I would speak to residents, they wanted new restaurants to open in our city. I’m in economic development, not commercial real estate, so I knew we had the need to bring in an expert.”

Numerous retail recruitment consultants had pitched their services to city leaders’, but Forsythe didn’t have a staff member solely focused on retail attraction and operating software.

I’ve been successful in economic development, but I didn’t have the confidence in retail. Retail Strategies provides that expertise.”

The Retail Strategies team, lead by Beth Miller, got boots on the ground looking at several properties, including SouthPark Mall that was changing ownership hands, and had recently lost a Sears. The goal was to have two to three key properties and Retail Strategies would create a pursuit list of retail and restaurants to recruit.

Understanding that residents wanted new restaurants, specifically fast casual brands, Retail Strategies worked to match up Moline’s demographics with restaurant concepts that were the most viable options. After the research phase, the team got to work marketing the properties to developers, retailers, restaurants and the brokerage community.

Forsythe was able to step out of the day-to-day involvement to focus on other parts of his job. He was also able to save budget dollars by not attending ICSC RECon because the Retail Strategies team was there on the city’s behalf.

“Olive Garden was the number one request from our residents and the Retail Strategies team worked with Macerich, the owner of the SouthPark Mall, to make that deal happen,” stated Forsythe.

Success is not always defined just as store openings and the Retail Strategies team has successfully assisted in driving interest to many other sites and proposed retail developments in the market during the partnership. These conversations don’t always lead to immediate store openings, but the team has been very successful in getting retailers and developers to take a very close look at the market where previously they would have passed over it.

After the first two businesses opened, the sales tax created more than paid for the contract. Nearly $500,000 in sales tax revenue is now generated annually by the retailers and restaurants that have located in Moline.

The partnership has helped Moline with overall quality of life and business recruitment beyond retail. Employers, such as John Deere, want options for their employees so Moline can message the city as a progressive community to live, work and shop.

“In the Quad-Cities you have so many choices where to live. Having national and regional retail and restaurant brands helps draw people.”

Back to Success Stories

Let’s talk about development in your town.